Why do women have orgasms?  This is a question that's been baffling scientists for years.   We all know that men need to have an orgasm to impregnate a woman but women don't need an orgasm to get pregnant.  Well not nowadays anyway.  Researchers have now discovered an answer and it's all tied in with ovulation.    Several mammals - including rabbits, camels and cats only release an egg after being stimulated and it is now believed that way back when, the hormones released after an orgasm would cause a woman to ovulate.   Orgasms now have no reproductive function - we don't need one to trigger ovulation but instead our bodies have evolved to ovulate regularly, mostly once a month.  Which is pretty clever! Other scientists have come up with different explanations as to why woman have orgasms when they perform no reproductive function, such as creating a bond between a man and woman and to encourage us to have more sex therefore reproducing more.  But they DO perform a function - they feel bloody great!  Why can we not just accept that women are allowed to enjoy sex in the same way men can?!  Us women do it for pleasure too you know! Hannah Hunter 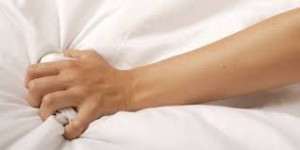 This entry was posted on Saturday, August 6th, 2016 at 10:24 am and is filed under General. You can follow any responses to this entry through the RSS 2.0 feed.