Smart technology - most of us couldn't be without it, and the clever technology has now made it's way into the sex industry.  Condoms are smart - anything that protects against unwanted pregnancies and STIs are, without doubt, smart.  But this new condom (which isn't actually a condom, but is a ring that is worn at the base of the condom), plays many more roles than a conventional condom.    It can detect STIs such as syphilis and chlamydia, it can measure the speed and the total amount of thrusts, give girth measurement, average body temperature and can also measure the amount of calories burned during a sex session - pretty smart hey?  And according to the company who are manufacturing it, there are 90,000 I.Condoms on pre order at a cost of £60 each.   Will this be a piece of "smart" technology that will end up being just a fad?  Who knows, but you can't beat a good old latex condom for protection. 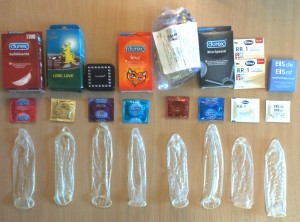 This entry was posted on Monday, December 4th, 2017 at 11:29 am and is filed under General. You can follow any responses to this entry through the RSS 2.0 feed.