What I'm about to tell you will come as no surprise; generally speaking women feeling guilty after having a one night stand, but men don't, far from it - they wish they'd had more!  A survey has revealed that 35% of women felt guilty about waking up in a stranger's bed compared to just 20% of men, and only 30% of women felt happy with their most recent one night stand whereas over 50% of men were very happy.  80% of women were pleased that they'd turned down a chance of a one night stand but only 40% of men felt the same way.  So why is it that women feel more guilty than men do when it comes to one night stands they encounter? There is one theory that men gain more sexual gratification from it than women do, but evolution is said to be the real reason here, with men theoretically being able to father thousands of children in a lifetime, and women being the more nurturing sex.  However, the varying attitudes that both genders have towards sex will give the more accurate explanation in my view, and that has got to be the double standards that are applied to women and men and their sexual role in society.  Attitudes are slowly changing, but really no-one should feel guilty about doing something that's not hurting anyone and that they enjoy.  Life's just too short isn't it?  Maybe in 10 years time if another survey was taken, the statistics would be more on a par! Hannah Hunter 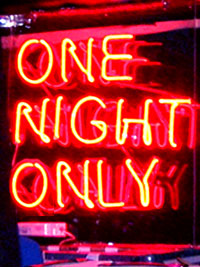 This entry was posted on Monday, January 23rd, 2017 at 12:29 pm and is filed under General. You can follow any responses to this entry through the RSS 2.0 feed.