Attack of the Baps! 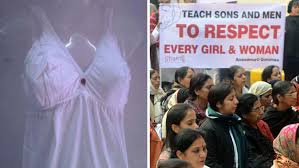 I absolutely agree that boys should be taught to be respectful of women and girls but I kind of draw the line at this... 3 young students have invented a camisole top which administers an electric shock to anyone who tries to grope it.  AND notifies the police! Excuse the pun - clever though I think it is, but isn't this a little O.T.T.?  (Over the top - get it??!) What happens when the wearer is on a busy tube and someone accidentally brushes against her breast?  They will get the shock of their lives!  Obviously this device needs to be fine tuned before it hits the shops for health and safety reasons I guess, but is this really going to deter men who are disrepectful of women?  It's reminiscent of the anti-rape device which acted as a Venus Flytrap - the penis could get in, but not out again without being hospitalised.  This is pretty ruthless stuff and quite draconian in my eyes.  I can see what the 3 young students are trying to do, your hearts are in the right place, sorry to sound patronising but once they hit the real world they may find out that a little cami top with an electric shock adminstered to anyone who happens to touch it may well be laughed at; if this hits the shops I will be astounded!  Oh yes - and notifying the police?? Are you joking?  If I had been wearing this cami for the last decade the police would have me up for wasting police time - a 1000 times over!

This entry was posted on Monday, April 8th, 2013 at 8:31 pm and is filed under General. You can follow any responses to this entry through the RSS 2.0 feed.