When going abroad I always take extra care to check out what the native creepy crawlies are - and no I'm not talking about the local men!  More like whether there are any poisonous snakes or spiders the size of my hand, and the like, then at least you can be prepared.  None of this squatting in the bush on your way home at 3am when needing a pee!  And after this story, I hope that men will not be getting out their old boys to do the same, or a terrible fate may befall you..which is what happened when a farmer in India when he stopped for a slash in a field.   The long and short of it was he got bitten somewhere a man really doesn't want to be bitten!   I won't go in to detail for fear of putting your off your breakfast, but suffice to say it wasn't pretty.  However - he did survive although others aren't so lucky; snakes bite around 5 million people each year and cause 100,000 deaths, so men - -heed my advice and keep that trouser snake out of sight from other snakes! If you haven't worked out my picture yet, real snake bites are a bit too gruesome so I thought I'd use a picture of that oh-so-popular-in-the-90s drink Snakebite (half cider, half lager and a dash of blackcurrant) instead! Hannah Hunter 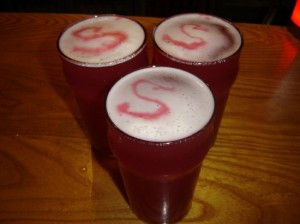 This entry was posted on Saturday, September 26th, 2015 at 9:21 am and is filed under General. You can follow any responses to this entry through the RSS 2.0 feed.