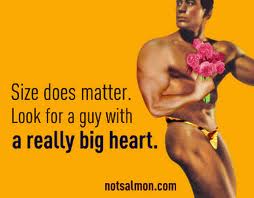 It seems that penis size does matter - but to other men moreso thanto women - and I'm not talking about only gay men here.  A study has been carried out with a bunch of male athletes - both gay and straight.   As I'm sure we all know, most men do check out other men's "boys" when in the locker room, and it turns out that the men with the bigger penises are idolised by their team mates and  that they are seen as more masculine than their less well-endowed fellow athletes.  Some athletes even admitted to giving themselves a semi-erection to make themselves appear better endowed! However, not only must they have a large willy to be valued as a proper man, they must also be seen to be making use of what God gave them, that's right, to really be respected by fellow athletes, it's not enough to simply have a big one, they must be seen to be working it to the max!   These are athletes we're talking about here - a hugely competitive section of the human race so there is no reason why this competitive streak wouldn't carry on into the locker rooms - but this is just about men being men really, definitely the more simple of the two sexes  ;0) Hannah Hunter

This entry was posted on Tuesday, March 25th, 2014 at 4:41 pm and is filed under General. You can follow any responses to this entry through the RSS 2.0 feed.