Plump Up The Cleavage 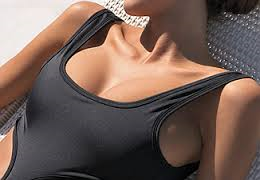 Men - are you stuck for what to get the woman in your life for Christmas?  Well, if she feels she's lacking in the cleavage department then this could be just what the doctor ordered.   A new boob-boosting procedure is now on the market and it doesn't involve anaesthetic or surgery - how appealing!  It comes at a cost of around £1000 but most boob jobs cost around £4000 and involve a lot more risk so the lunchtime boob job (as it's been dubbed) could be the perfect gift. Injectables such as botox give a plumping and lifting effect, but the botox will wear off at around 6 months.  But for any woman suffering post pregnancy droopy boobs or generally not having the boobs they had when they were in their 20s - what a lift - emotionally aswell as physically.   A Harley Street doctor has said his celebrity clients are using this as the perfect pre red carpet procedure but I have no doubt this will filter down to us mere mortals at some point and become accessible to all.  It does beg the questions though, us woman aren't going to resemble the face/bodies we were given, but whatever we think of that, it is a sign of the times after all. Hannah Hunter

This entry was posted on Tuesday, November 18th, 2014 at 11:28 am and is filed under General. You can follow any responses to this entry through the RSS 2.0 feed.