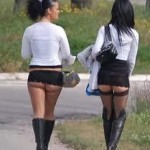 Should anyone class mini skirts as pornographic?  The dictionary definition of pornography is "..the depiction of sexual behaviour that is intended to arouse sexual excitement in it's audience..." Well the Indonesian government is banning mini skirts for this very reason, plus it makes men "do things" according to a recent article. There have been rape cases and other immoral acts because women weren't wearing appropriate clothing, according to the religious minister in the country. Placing the blame of the crimes against women on their choice of clothing is downright shocking and wrong.  Ok, so Im sure if a red-blooded man sees a pretty women in a mini skirt feelings of sexual excitement may be aroused but this doesn't mean they will go and rape this women (unless they are mentally ill).  Surely this is an out of date, inaccurate idea of immorality?  I have a sneaky feeling that this policy is a drive for popularity and won't really be strongly enforced, but in fear of sounding patronising - people must live and learn.

This entry was posted on Wednesday, April 4th, 2012 at 8:12 am and is filed under General. You can follow any responses to this entry through the RSS 2.0 feed.