Flashing on a Plane 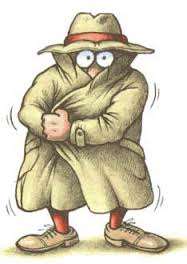 A chap has been arrested for exposing himself on a plane,  he apparently stuffed his hand down his trousers and pulled out his willy.  He wasn't walking up and down the isles shaking it in everyone's face though, he was far more subtle and did it in the "privacy" of his own seat.  Now once arrested for indecent exposure he defended his actions and his story went like this.. he had a headache earlier in the day, so he applied some peppermint oil to his forehead, he then went to the loo and inadvertently the peppermint oil got onto his nether regions and once back at his seat, he was experiencing a dreadful burning sensation down there and had to do something about it there and then. This could actually be a credible story - I'd believe it but I am quite gullible.  But I am sure there is many a chef who suffer from chilli willy after a post curry preparation and might be sympathetic to the chap in this story. I suppose we must remember that not all flashers look like this one here (like they used to do in my youth), but they now come in all shapes, sizes and places and they might be far more subtle than they used to be - so just be aware! Hannah Hunter

This entry was posted on Monday, August 19th, 2013 at 7:33 pm and is filed under General. You can follow any responses to this entry through the RSS 2.0 feed.