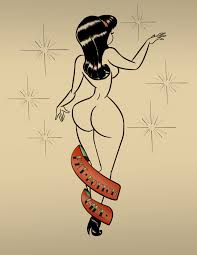 No, this isn't a post about a Queen song, but it is about the sexual activity of ladies with generous hips.  A professor has found that women with a hip width of more than 36cms have more sexual partners than those with smaller hips; now this is apparently because child birth is easier and less traumatic for women with what we affectionately term as "child-bearing" hips.   They are also more likely to lose their virginity at a younger age and have way more one night stands too - sounds like fun! This professor says that women's hip width has a direct impact on their risk of potentially fatal childbirth related injury, so subconsciently less curvy women would be more cautious of getting up the duff, and the less sexual partners they have, the less likely this will be.  Isn't nature clever!  However, I can see how this would have related to women centuries ago but evolution and social changes have surely made this arguement obsolete in today's world?  I just don't think one can make such generalisations today - there is a whole gamut of reasons why one woman may have more sexual partners than another, and I'm not sure hip size can be taken into account! Hannah Hunter

This entry was posted on Tuesday, April 29th, 2014 at 1:24 pm and is filed under General. You can follow any responses to this entry through the RSS 2.0 feed.