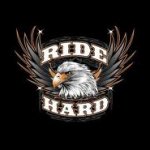 Now here's a chap whose fallen on hard times (I'm on a roll with the puns).  He's suing because  he's claiming he's been left with a permanent erection after taking his motorbike for a ride (I wonder if he'll pull it off in court..).  This was apparently caused by the ridge-like seat of the bike, aimed at making them more comfy.   This would raise (he he!) a few laughs at first read, but this must cause havoc while trying to pee! The down sides aside, surely the world would be your oyster, for example a world famous porn star, (note to self:  Ms Cherry-not everyone has the same dirty mind as you do..) but I'm pretty sure  several WAGS know what they'll be buying their other halves for Christmas this year!

This entry was posted on Thursday, May 3rd, 2012 at 8:09 pm and is filed under General. You can follow any responses to this entry through the RSS 2.0 feed.