Don’t Have To Be Young To Have Naughty Fun!

Just look at those joyous faces whilst enjoying a grope, and they ain't no spring chickens either!  And who says you have to be a spring chicken to enjoy a grope anyway?  Well, no one.  Age shouldn't be a barrier to an active sex life and a recent study about pensioners and their sex lives demonstrates this.  54% of men and 31% of women aged over 70 said they're still sexually active, and of these a third said they have sex at least twice a month.  Hmm - why I wonder is it that men are having more sex at that age than the women...call me cynical but the great big reason lit up in neon lights is they might have much younger partners, something to do with wads of cash perhaps, because it won't be for their sagging bottoms I shouldn't have thought! As they age women say that although they have fewer nights of passion they enjoy them much more - all about the quality at this age rather than the quantity.  The fact that Brits are having sex much later on in life must also raise the important issue of their sexual health, which has often been overlooked in this age group, so hopefully this study will highlight the need for this. All this kind of contradicts the  stereotypical prudish reputation that we have for all things intimate.  Go our octogenarian oldies! if you still can, and want to - you should.  80 is the new 60 anyway and I've heard GILF being thrown out in conversations now and again - which may be the new MILF!  Who knew! Hannah Hunter 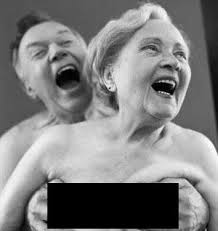 This entry was posted on Monday, February 9th, 2015 at 6:22 pm and is filed under General. You can follow any responses to this entry through the RSS 2.0 feed.