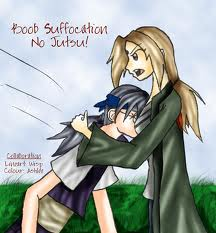 A lawyer has accsed his girlfriend of trying to smother him to death by her 38DD boobs!  The very quick back story - she found out he was going to leave her, they were having sex and he was kissing her ample bosom and then she pushed his head into said ample bosom to try and smother him.  Suffocation by a pair of 38DDs - what a way to go!  When asked why she tried to kill him that way, she told him she wanted his death to be as pleasurable as possible - ahh, houw thoughtful.  Nowt so strange as folk eh?! If I found out my partner was going to leave me, Im not sure death by boobs would be my choice way of doing so.  It's a bit fantastical, I'm sure I've seen it in a film somewhere, but each to their own.  Anyway - in the unlikely event his next girlfriend also has a large rack, he'll hopefully have learnt his lesson and be taking a snorkel to bed with him in future..

This entry was posted on Friday, November 23rd, 2012 at 6:26 pm and is filed under General. You can follow any responses to this entry through the RSS 2.0 feed.