Us women get fed up with our alpha boyfriends or husbands from time to time, of course we do!  So I can completely understand why a woman might prefer at times to be in a relationship with another woman; more sensual, more understanding, emotionally available and so on.   Well according to a study of 78 heterosexual women aged between 16 and 65 who'd been in at least one relationship with a bisexual man, it was the bisexual man who came out tops for being best lovers.  Sexually attentive and emotionally available were two of the pros for being in a relationship with a bisexual man.   Being a bi man - or indeed being in a relationship with a bi man, hasn't been easy in the past, with so many stigmas attached and stereotypes such as promiscuity, being untrustworthy and having HIV and other STIs have been slapped on the bi man, but in reality they seem to be a popular choice for straight women, some even saying that they make better fathers than a straight man.   Surely in today's world these stigmas need to be lifted and anyone should be able to be in a loving relationship with whomever they want.   It's all about being open-minded towards all sexualities, not just your typical straight man and straight woman coupling! Hannah Hunter 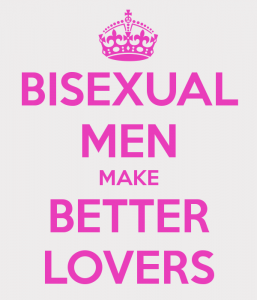 This entry was posted on Wednesday, August 31st, 2016 at 9:04 am and is filed under General. You can follow any responses to this entry through the RSS 2.0 feed.