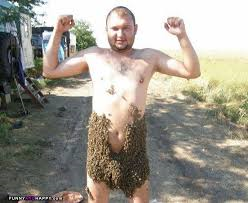 A man has recently allowed, actually encouraged a bee to sting him.  Odd hey?  But not just on his hand or arm or leg, ohhhh no,  on his penis!  This then turned into a bit of a foray into the pain barrier - via plenty more bee stings, to see which part of the body hurt the most!  This could sound very much like a weird kinky sexual arousal thing, but  apparently it all came about while Michael, a postgraduate studying bee behaviour, had a bee inadvertently fly up his trouser leg and stung his testicle.   Then the interest in the pain experiment arose.... During the next five weeks he exposed different parts of his body to the bees, he was stung pretty much all over his body and believe it or not the most painful area he found to be stung on was his nose - and not his penis; because he did let the bee sting him again on his genitals, just to make sure...He was careful to explain that there was no crossing of wires of pleasure and pain in his nether regions - he said it was definitely painful.   Although I do wonder if there was any thinking that he could apply the "bee sting pout" (full, voluptuous lips that us women are always after), to a bee sting penis - hmmmm, now there's a very silly idea indeed!

This entry was posted on Tuesday, April 8th, 2014 at 6:37 pm and is filed under General. You can follow any responses to this entry through the RSS 2.0 feed.